Today was Kiara’s last day at the hyper growth startup Sphere which has grown to 700+ employees in 4 years. Sphere sells payroll software to SMBs and has been featured in the coveted Bessemer Ventures Cloud 100 List. Kiara was an early employee and was proud of making the first few sales with the founders.

Three months ago a new sales leader joined Sphere who started making a lot of changes—people, processes, tools etc. He increased the prospects in Salesforce CRM by 8X. Every rep had more leads to call than ever before and yet, conversions remained poor. Kiara was one among them. About two weeks ago, the VP called Kiara and gave her two weeks to improve her conversion rate by 2.8% or be ready to say goodbye.

She wondered ‘Is it me?’ as she prepared to exit.

However, on Thursday, Kiara came in early and started looking at one prospect after another in Salesforce—fast and furious. Suddenly something occurred to her—the 8X lead records had no insights on prospects except for the contact information. Her Buddha moment struck her and she scribbled – ‘WHY’. A new wave of energy surged. She smiled and said to herself—it’s not over till it’s over. 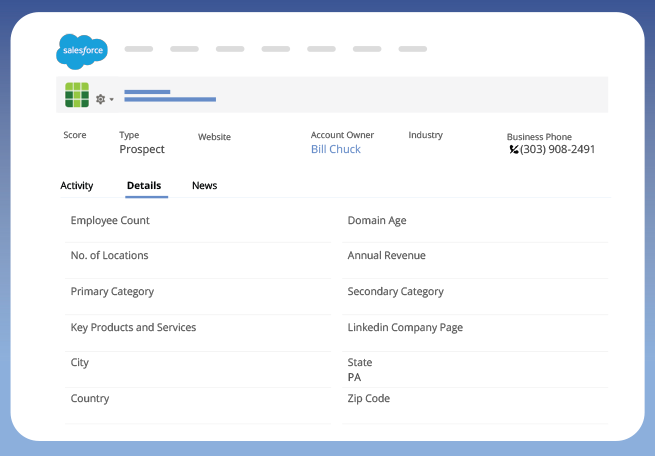 At 4pm the same day, Kiara met with the VP of Revenue and passed the note,

‘The “WHY” is missing. Conversation failed. Conversion failed.’

along with two charts—one for the first 13 days and the other for the past 8 hours. She had manually researched prospects—to better understand why they were the right ones to call—and while she could only make 18 calls, 11 turned into meaningful conversations.

The reps were not the problem. The data was.

This problem begged the question—

How would the reps augment the Account Intelligence they desperately needed in their CRM?

The last 45 days had felt like 45 months for Kiara—on the verge of being fired to being promoted as Director of SMB Analytics! Her discovery of the poor/missing account intelligence in Salesforce causing poor sales conversion was the highlight at the company all-hands meeting and the board meeting this week.

As Kiara reflected on the fast turn of events, a sense of urgency and responsibility dawned on her. Her practice of manually researching every prospect was time-consuming and unscalable. There were 640K prospects in Salesforce with just contact information provided by ZoomInfo.

How can the 87 sales reps ever have any meaningful conversation?

Kiara needed to quickly find a solution to automatically build a profile about every single SMB prospect.

Kiara knew exactly what she wanted but she did not know where to get it. She started scanning software review websites such as G2 for a suitable data partner. BuzzBoard stood out because of the exclusive SMB focus along with the breadth and depth of signals it offered. 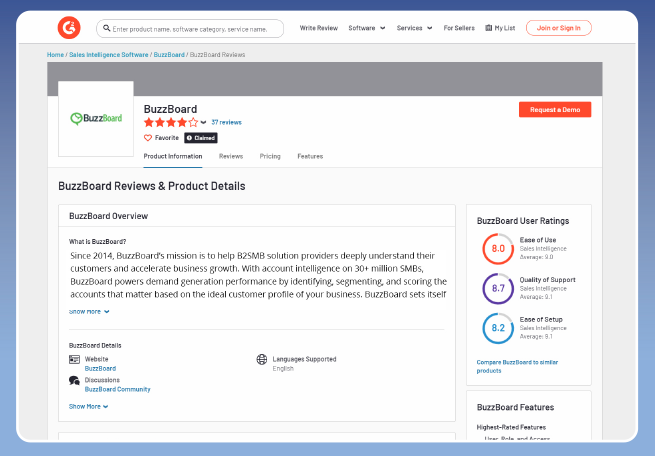 Will BuzzBoard work for her, she wondered?

Can BuzzBoard enrich all the 640K SMB prospects in her CRM, filter out the irrelevant ones and then prioritize them with a fit score?

She reached out to BuzzBoard for a Discovery call and worked with Marilyn from BuzzBoard to scope out the test and also install the Salesforce native app. Once all was set-up, Marilyn pulled the trigger on test records and within seconds, all were enriched with digital signals.

As Kiara went over them one-by-one to check for accuracy, she was in a state of disbelief. With the memories and the struggles of August still fresh in her mind, the unravelling prospect insights felt almost euphoric.

It was finally the ‘rubber meets the road’ moment. She assigned the enriched prospects to the reps. The reps not only had more conversations that week than ever before, the conversions shot up 3.7X. Reps made far more commissions.

Kiara was ready for the next play—to change the baseline of conversations and conversion rates. The new round of funding was 2 months away.

As a B2SMB solution provider, if you are still dependent on vague and unspecific firmographics data to qualify and engage your prospects, you are doing an injustice to your sales and marketing team.

Get ready to tap into the power of digital signals to improve virtually every aspect of the sales cycle, including prospecting, targeting, messaging, and engagement.

Get a Sample Enrichment